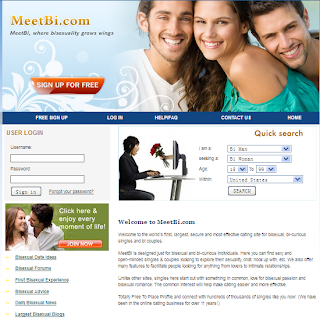 In a world where homosexuals want to be accepted as having been born homosexual, and heterosexuality is still the norm, bisexuals are viewed by some as deviant nymphomaniacs who love just any sex. Take this label in stride as it doesn't really matter (some people are even turned on by the notion) and take comfort in the fact that your dating landscape is twice as wide as that of wholly straight or gay individuals!

Homosexuality is still considered by some in the United States as immoral or unnatural, but the general population's opinion on the issue has been steadily swaying in the direction of acceptance, for some time, and at this point, being a homophobe is seen by many in the same light as being a racist. Prejudice exists of course, but the prejudice against prejudice has a pretty good foothold in American culture as well. With that said, going to the local honky tonk festival or to the nearest church function is not likely to land you a whole lot of same sex dates, nor is it likely to land you a person of the opposite sex who is totally cool with you being willing to date people of your own gender. Put yourself in more liberal or neutral environments and your odds of stumbling across other bisexual people increases. Dance clubs are a good bet, as are shopping malls and fashion based establishments.

Come out to your friends and see who knows of someone that could be an interesting match for you. It's not necessary to reveal your orientation to anyone you don't want to reveal it to of course, but the stone ages of everyone who thinks differently being spat upon is laughed at by most people nowadays, so the benefits of having friends (even acquaintances) who know about your orientation outweighs the risk of being viewed a tad differently (which would probably be temporary at worst). For some reason many women actually get a bit giddy at the idea of hooking up one of their guy friends with another guy friend as well, so this can be an effortless path to a hot date.
Networking within the homosexual community can often point you towards like-minded bisexual individuals. Gay bars usually have clientele which includes many bisexuals along with those who are strictly homosexual (as well as some heterosexuals), so they can be great venues for meeting the types of people who you'd like to date or who know someone you'd like to date. Become involved with gay pride celebrations and LGBT (lesbian, gay, bisexual and transgender) movements; this will be a rewarding and worthwhile experience anyway, along with being a way to meet attractive people who relate with your lifestyle and may be interested in you romantically.
In general, it's a lot easier for a woman to tell a straight guy she's dating that she's bisexual, than it for a bisexual man to inform a straight girl he's dating of his orientation. The idea of lesbian intimacy is quite erotic for many heterosexual men, while the idea of gay relationships among men just makes a lot of women think of shopping. As such, letting your partner of the opposite sex know about your orientation and lifestyle is usually less of a hassle for bisexual women than for bisexual men.
As a bisexual woman, in most cases, you can let a guy you're dating know that you also like girls, right up front. So long as he's not very religious or extremely conservative, then chances are he will at the very least be accepting of this information. Some men will drool over your admission and give you full permission to date women on the side. The threesome fantasy is anything but rare so you may be able to make your guy's naughtiest dreams come true in the process of just being yourself. In these types of relationships, it's very important to keep track of your own emotions though and be very aware of your feelings for the girl you're having sex with as well as your feelings for the man you're committed to. Just how serious or casual a relationship is, should always be known fully by both partners.
Bisexual guys letting heterosexual girls they're dating know about their varied romantic interests can be a little bit more of a shock. When you're dating bisexual girls who can see the appeal of playing both fields and can relate to it, your admission will usually be accepted rather easily (which is an argument for bisexual guys seeking bisexual girls to date), but some heterosexual women look for masculinity in a boyfriend and may see the willingness to sleep with another man as somehow less than manly (even though it's really not; the notion that masculinity/femininity and sexual orientation go hand in hand is a major generalization that holds true only for some). Most women aren't going to break up with you once they learn that you're attracted to other guys though, so long as you explain that you'll be faithful and you're committed and such. It's just typically better to put the information on the table rather than to withhold it and risk your girlfriend finding out about it later, which could lead to a breakup. Bisexual girls dating heterosexual men and getting to bring other women into the relationship works a lot more smoothly than bisexual men dating heterosexual girls and trying to bring other men into the relationship, so don't suggest it until a very strong trust has been established (ie enough that she won't feel threatened by any other partners you may have).
Bisexuality is an orientation which some may completely fail to understand, some may embrace, and others may simply shy away from (there's a pretty popular strain of thought that everyone is bisexual to some degree) but ultimately love is what everyone seeks and there is nothing stopping you from attaining that. So long as you're forthright about who you are and selective about who you choose, then there's nothing stopping you from a perfect future with an ideal person.