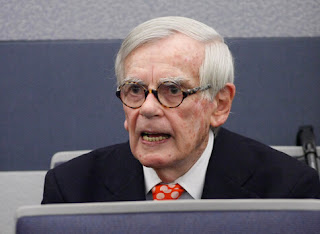 The sexuality of Dominick Dunne has been widely speculated, but after the writer's death in 2009, his son made it very clear that his father was bisexual. Dunne's son is Griffin Dunne, most famous for "An American Werewolf in London" and the more recent "Dallas Buyer's Club." It was on "Good Morning America" on ABC that the younger Dunne talked about his father's sexuality.

What's interesting is that Dominick Dunne catered to the gossip mill, especially for Vanity Fair, where he wrote celebrity-oriented articles for more than 25 years. He wrote about the great scandals of the day, including the O.J. Simpson case, Claus von Bülow, Imelda Marcos, the Lyle and Erik Menendez murder trial, Adnan Khashoggi, William Kennedy Smith’s rape trial, the death of multi-billionaire banker Edmond Safra, Brooke Astor’s neglect by her son, Phil Spector’s murder trial, the Princess Diana inquest and Monica Lewinsky. Dunne wrote books such as The Two Mrs. Grenvilles, People Like Us, An Inconvenient Woman, A Season in Purgatory, and Another City, Not My Own.


Not only did the actor/producer talk about his dad's despair after his actress daughter Dominique Dunne was murdered by a former boyfriend, but he discusses the character Gus Bailey in the author's last book "Too Much Money," which was released just after Dunne died at age 83. The semi-autobiographical novel revealed a lot about the real man behind the flamboyant public figure. He wasn't good at keeping some secrets, but he did keep his bisexuality a secret.

Dunne wrote in his latest book: "I'm nervous about the kids, even though they are middle aged men now, not that they don't already know. I just don't talk about it. It's been a life-long problem." His son said on the TV news show that it was just like his dad to "finally come out and then leave. It was hardly a big deal either way. He was was closeted about heterosexuality as much as bisexuality as he was about celibacy. He didn't have boyfriends or lovers, they were never part of our lives."

Toward the end of the writer's life—he died of cancer—Griffin went to a clinic in Germany where Dunne was getting stem cell treatments. He met a man, Norman, who obviously had a "long loving relationship" with his father and was "looking after him." He was married for 11 years and had five children. He is the brother-in-law of writer Joan Didion and older brother to writer John Gregory Dunne. In one of his last interviews for The Times of London, Dunne labeled himself "a closeted bisexual celibate" but declined to elaborate. Whatever, he was a great writer and a cool character.
(On a personal note, I had the opportunity to meet Dominick Dunne twice due to some well-known journalism pals who were friends of his. It was during his coverage of the O.J. Simpson trial for Vanity Fair. I, unfortunately, have no bi-dar so didn't even think about it, but wished I had the chance to ask.)

Bi and Lesbian dating etiquette is quite similar to that of heterosexual rules. With that being said, there are some differences that will arise when dating the same gender, but they are easily overcome with time and experience. If you are finding that you are having a hard time getting dates, or keeping the interest of a lady, there may be some considerations you should make. Determining why you would like to date is important. Whether it be to avoid being lonely, for a sexual relationship, or for a long term commitment, knowing why you are actively seeking a date can help you narrow down your choices. Be sure that your partner understands your intentions by being open and honest. Play head games will get you nowhere in the world of lesbian dating. First dates are often the scariest, but they should not be. When meeting someone for the first time, it is important that you let someone know where you are going and when you will return. This is for your own safety,