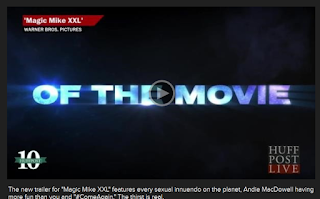 Jada Pinkett Smith plays Rome, who runs a strip club at a private estate where mostly African-American women are being serviced by black male dancers. “You are all queens!” she screams to her black sisters, who are of all shapes, sizes and ages. Then, the girls go crazy when the guys sing and strip for them.

Later, when Rome leaves her comfortable confines and goes out of her way to help out Mike (played by the irrepressibly handsome Channing Tatum), she runs across Paris, (played by Elizabeth Banks) who is running the stripper convention.
As soon as they see each other, Rome and Paris walk up to each other and embrace in a very sexy long lip-lock. Mike and the guys are a big shocked at the apparent history between these two gals.


See, the boys are all comfortable with each other. They think nothing of driving around in a convertible with their arms around each other, or taking their clothes off in front of each other, or chatting about how their bodies look. Their bromance is intense, but it’s never sexual, or even inappropriate. Or icky.

In fact, it’s funny to note that Matt Bomer, who reprises his role as the all-American, airy Ken (because he looks like a Ken doll?) is openly gay in his real life. In the first “Magic Mike,” he had a girlfriend, but this time around he seems more into himself.

There is a real-life bisexual in the cast, too. Amber Heard plays Zoe, who is first caught taking photographs of Mike peeing on the beach. She has a few throw-away lines about not being too interested in Mike. In fact, at one point, they both joke about being drag queens and exchange joke drag names.

Amber Heard has been out as bisexual for years. The 29-year-old actress married 52-year-old Johnny Depp last year, and she recently gave interviews talking about how being out as bisexual may hurt her career in Hollywood.

Heard tells People Magazine that she purposefully asked to throw in a few lines that made her character more bisexual (although she doesn’t have any lady-lip-locking scenes like Smith and Banks have)!

Heard in 2010 came out during a GLAAD event and was dating artist and photographer Tasya van Ree.

The women seem a bit ridiculous about throwing themselves (and their ticker-tate of dollar bills) at the “male entertainers.” Heard defends it, saying, “It’s a film about men seeking sexual attention. It gives the power position to women.”

Although in the film, actress Andie MacDowell is shown having a cozy time with her wine-swilling friends, and they’re all ready to drop trou when the hunks walk up to their door (to see her daughter). The seemingly smart women all become puddles of jelly when the guys with the killer abs flash a teeth-whitening smile. Then, seemingly normal women will swoon when being in a dorky “Twilight” strip tease, or a play on “Shades of Grey,” (walking in as bride and groom and ending up in a sling.)
These are not great role models for women, unless the message is that women can be as stupidly sex-crazed as men.

Perhaps if Amber Heard is really worried about her career, she shouldn’t be as concerned about being bisexual as she should be about doing another “Magic Mike” sequel.