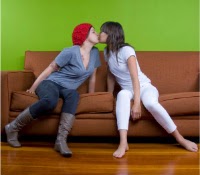 One of the first times I went on a date with a girl, she asked me, “Are you bi or gay?”

“Well, I’m still figuring that out,” I told her.

Her response was: “I knew you were too good to be true.” I then fell all over myself in an effort to explain to her that, although I was unsure about how to define my sexuality, I was definitely into girls, more so than I’m into guys. I am not and have never been bi-curious, bi for attention or bi only when men are around. Since then, I’ve figured out that I’m solely into girls. So I guess I wasn’t too good to be true, huh?

But, alas, in parts of the gay community, being bi or being a lesbian who has hooked up with guys in the past is like having horns or an incurable disease.
This isn’t the case for all girls I have dated, but some lesbians don’t want to date anyone who has been near a penis. Ever. Girls who have always been gay and nothing else carry it like a badge of honor. And, frankly, I’m jealous of them. I wish it was that easy for me to figure it out. But it wasn’t.
I blame the bi-hatred on the rise of girls I will call “Facebook Lesbians.” These are chicks you see on social networking sites and in clubs and bars getting touchy-feely with their platonic girlfriends to get attention from men. (Hello, boob circle photos.) They make being bisexual unacceptable in the eyes of some and are the reason even I can’t say the word without putting air quotes around it. And, although for most of these girls it stops with a kiss or an innocent boob-grab, some of them actually identify themselves as bisexual, thus mucking things up for the whole gay community. I have numerous female friends who think they swing both ways simply because the idea of kissing another girl doesn’t totally repulse them. But would they have a relationship with another woman? No. So are they bi? I don’t think so.

One of my friends in particular finds it necessary to grab my face and plant a wet one on me every time she has had too much to drink. Often she gets the bartender’s attention beforehand. This pisses me off because it is both insensitive and hurtful. She’s assuming I have no problem kissing her because I’m gay. But the fact is, I don’t want to kiss her because she’s my friend and not my type. Straight girls don’t go around making out with their guy friends. (Usually.) So why the double standard?

Luckily, I have met numerous girls who can commiserate. A lot of gay girls I know dated men in, say high school, but grew more and more attracted to women, until the thought of getting with a guy became repulsive. While I believe I was legitimately into dudes when I was younger, I no longer am and don’t see myself ever going back. I have talked about this with a lot of lesbian women and none of us can figure out if we were suppressing our true feelings or if the attraction to men was genuine. For me, growing up, there was simply no other option. I lived in a small, conservative town and that was that. You were straight or you were straight.

So for all you boob-grabbing-attention-seeking-Facebook-lesbians out there, my message to you is this: Don’t kiss me unless you absolutely mean it. I’ll return the favor. OK? Great.