If being bi is OK and normal then why do most bi's hide their bisexuality? 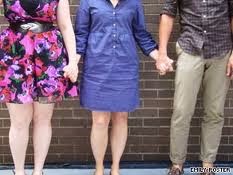 Many sites, and others, suggest that bisexuality is normal and OK, just like being straight. But most bisexuals seem to hide their sexual orientation. If it's normal, the why aren’t bisexuals more open and visible?

The answer? Straight is normal, and even gay is normal. But bisexual is not normal, it's a fad. ♥ www.meetbi.com ♥ — #1 Dating site for bisexual, bi-curious singles and bi couples.﻿

The choice to be out as bisexual is just that... A choice.
Bisexual people balance between what you consider normal sexuality "straight or gay"
Just because you have made a choice whether to be in a homosexual or heterosexual relationship does not mean the feelings and attraction are not there. Being in any relationship doesn't stop attraction.
You're trying to make a cut & dry argument about a topic that is far from cut & dry.
Saying that... I don't think bisexual people are not open about their sexuality because its normal... It's because of narrow minded people like you.

Bisexuality is not a fad. It is a definable, measurable, well documented sexual orientation.
A fad is like bell bottom jeans. Maybe you're confusing the decision for bisexuals to come "out" as a fad. Either way, you are confused and don't know what you are talking about. Read up on the studies on bisexuality. There are some good ones here on this site under Research, yeah.
As far as hiding our sexuality, as though that means it's a bad thing, you are again, confused and mistaken. Bisexuals are not like homosexuals who have no choice but to eventually "come out" because they fall in love with someone and don't want to hide their relationship. We don't "have" to "come out" if we don't want to. And with all the discrimination, bullying and ignorant, hurtful comments (like yours) it's no wonder that so many of us choose not to "come out".

"Even gay is normal"? Really? Tell that to the Stonewall veterans from 1969. Society has been changing over the last 40 years. Gay and lesbian individuals have had more progress in regards to social acceptance than bi women and men. The comment that "gay is normal" would not have passed muster even 15 years ago. I remember when my former partner - a lesbian - had it much easier than me as a bi woman. Some ( I don't even agree with most, but don't have stats to support that argument) bi people hide their sexuality because society has further to go with it. At least with homosexuality, even those opposed to it agree that it exists. Many bi people feel that the first hurdle is getting general society to agree that bisexuality is a legitimate orientation. Then, we can work on being out and accepted.

Of course being bi is okay, it's just there are people out there who believe in stereotypes (like bisexuals are automatically promisuous and so on). Some because they aren't sure what bisexuality really means and other think they know it even better than we do and try to convince others about their opinion (stereotypes). I told my friends I could be bi. Even IF they first thought of prejudices they knew these don't fit with me. Btw everyone I told about it was totally okay with that. But what about comming out at school (for example)? I'm not able to explain everybody that these stereotypes aren't right and what it really means to be bisexual, unfortunately rumours spread faster than I can erease them. I'd be tired of defending myself aigainst prejudices or people who think I am that typeof person. I doubt they'd really listen to me because they like to hold on their opinion. Even if I convinced a few of them, what about the others (I don't even know about all of them)? You're right, somehow I hide myself but you should know I'm defintly not a shy person. It's just this non-acceptance is annoying and actually my (probably) bisexuality isn't a big deal for me but it could become a big deal if special people talk about it. I don't really bother if they talk about me but I'm fed up with explaining and defending myself. At the end: I don't hide because I'm afraid! ...And sorry for misspellings, english is not my mother-tongue