Bare Down There: Women, Politics and Pubic Hair 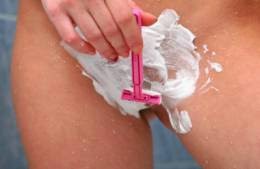 Young women are choosing to remove their pubic hair in record numbers.

Last weekend, I went to see my daughter in a university production of Eve Ensler’s The Vagina Monologues, the successful and somewhat cultish play that brings the V-word out from the shadows. On the way in, we were offered marker pens and encouraged to write on a large sheet of paper what our vaginas would say if they could talk.

My younger daughter and I were a little too British to give this novel gimmick our full attention, but I watched what the other women in the audience wrote. “Oh, hang on while I clear the cobwebs away.” “Talk about a lean period.” But then I saw that someone among the largely student, and presumably broadly feminist, audience had written, “I need a shave.” I snatched up a pen and replied (though never having conversed with a vagina before), “No you DON’T.”
Those familiar with The Vagina Monologues will remember that it contains an entire sequence concerning pubic hair. In it, a woman describes in eye-watering detail the painful process of removing her pubic hair at the request of a lover – the smarting, the soreness and the vague discomfort of trying to comply with the fetish of a sexual partner. The play was first produced in 1996 and yes, at that time, preferring to make love to a woman without pubic hair was considered to be a bit of a fetish.


Because I belong to a generation that considered pubic hair to be a given, and because, the Monologues notwithstanding, vaginas are not an everyday topic of conversation, the awareness that young women are choosing to remove their pubic hair has crept up on me only gradually. A gynaecologist friend remarked that she sees increasing numbers of hairless young women in her surgery. A nanny who used to look after my children casually shared her pre-holiday checklist: get euros, arrange cat-feeding, have full Brazilian wax. My 19-year-old nephew told his mother that he had never seen a girl with pubic hair.

Tentatively raising the matter in conversation with younger women, I expected that some of them might share my bewilderment with this still fairly new fad. But I was met with awkward shuffling and downcast eyes, which told me that it might be better to change the subject.

I have come across only one in-depth piece of research that measures the extent of pubic-hair removal among women. Conducted last year by Indiana University, which surveyed 2,451 American women, it showed that among the 18-24 age group, two-thirds had totally or partially removed their pubic hair during the past month, and a fifth had been hairless during that entire period. The prevalence fell as the age of the respondents advanced, but still in the 50-plus age group around 10 per cent had engaged in some total removal during the previous month. There is nothing to suggest that figures in Britain are likely to be much different.

Did this begin in the pornographic industry? Or has pornography merely responded to what is fast becoming the new normal? Images of female genitalia au naturel are now in a very small minority, and a large percentage of pornographic images show no hair at all. The partial or full removal of pubic hair in pornography is so widespread, Joe Slade, professor of media and culture at Ohio University, recently told The Atlantic magazine, that there is now a niche market for those who prefer to look at the fully covered version.
Our sexual lives are a complex and personal matter and it is not my intention to question the feminist integrity of any woman who chooses to go hairless. There are those who argue that it is in some way empowering and that it is something women do for their own satisfaction – wear that vagina loud and proud. The removal of pubic hair is not confined to man-pleasing Barbies, nor even to straight women. Nevertheless, the fashion for it makes me uncomfortable. Hairless female genitalia have an obvious association, and that is with pre-pubescent girls. Where there are hairless genitalia, surely the unwelcome suggestion of the childish body is never far away.

Women, more than men, prink and preen our bodies to bend to the rules of attraction – to look more youthful and even, you could argue, more childlike. Leg-shaving, lip-reddening, eyelash-darkening, hair-lightening – all these hint at the flawless childish state. But it is adult women who have sex and, surely, adult women to whom men want to make love.

Removing pubic hair is painful – agony, actually, according to those who have succumbed to waxing the area, which is the most efficient way to go about it. It’s painful when it grows back, and it’s expensive. It is also dangerous. Last year, Emily Gibson, director of the health centre at Western Washington University in the USA, launched an appeal to put a stop to the trend for hair removal because, she claimed, it increases the risk of infection and sexually transmitted diseases. “Pubic-hair removal,” she said, “naturally irritates and inflames the hair follicles, leaving microscopic open wounds.” She also said it was not unusual to see patients with boils and abscesses on their genitals from shaving. And all, it seems, because of a growing feeling that there might be something unacceptable about female genitals in their natural state. To me, this is a feminist issue.

What I find strange about this sea change, apart from the extreme speed at which it appears to have happened, is that something so widespread is so rarely talked about or questioned. I have never heard women discussing their intimate grooming habits among themselves, even though there are few taboos when women talk among their own sex. The implications culturally and politically are complicated and not entirely fathomable – but surely worth discussing.
The Vagina Monologues has evolved over the years, with new pieces added to keep it fresh and topical. If I were the author, I might revisit the part about hair, and give it a little trim and shave.