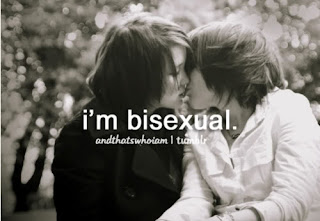 When preparing to out yourself as bisexual, realize that this actually means coming out as gay. Realize that the straight side of you is assumed normal and expected. The act of identifying yourself as something other than straight automatically makes you queer.

Of course there are always exceptions. If your circle of friends and family are staunchly gay, coming out as straight would have greater impact, the assumption of gay could exist. Either way, coming out as bisexual puts you at odds (or on par) with almost every existing category of sexuality out there.

There is no one way. And every way is somewhat the same: usually a misunderstanding.

1. From the street, the clean and bright green sign beckons: Kent’s Kitchen, come in and eat. It is a little daytime cafeteria sandwiched between an over-flowing Chinese grocery and a meat market with a slab of dripping BBQ pork hanging in the window. The street is full of people. It is noon in Chinatown.

Inside Kent’s Kitchen, a dozen tables are stacked in long rows beside a wall-length mirror. This is where the working people sit on their lunch breaks eating cheap Chinese food from the buffet. Rice and one topping is $3.75. Rice and two toppings is $4.50. There is fried rice, steamed rice, pork, chicken, beef, black bean, mama’s tofu, chow mien and vegetable – the choice comes down to personal appetite.

I had just moved home from my second year at university and asked my mother to lunch so that we could talk. Talk being a euphemism for confession. I was gearing myself up to tell her that sometimes I like girls more than boys. It seemed important to tell her this right away, the day after I moved in, because I was madly in love with a girl and thought the whole world should know.

Sitting there, elbow to elbow with an older man reading a Mandarin newspaper, I remember thinking that if there is a type food to suit every individual taste, why shouldn’t it be that way with sexuality? But it isn’t that way, or at least it doesn’t seem that way in the mainstream world. Out there, it’s gay or straight. And if I was sitting here telling my mother that I wasn’t straight… her odds were high that I was gay.

I remember my internal question better than my mother’s reaction, which came along the lines of positive, unsurprised and caring. But what scared me the most was how to tell her when I was once again, and inevitably it did happen, in love with a man. It would be like coming out all over again. And it was. It always is.


2. “I remember when I was going out with Denise, back when Denise was still Denise not Devon, and people on the island saw me and when that [relationship] didn’t work out, they saw me with Rory,” says Ursula Watt. “I could see the cogs working in their brain.”

Watt knows a lot about the quirks of coming out as bisexual having lived it for five years. I know this because she and I came out together. “Came out” in the big gay sense of the term: cruising the sole gay bar in town together, dating women, getting mixed up in the queer women’s scene. A true exploration of the homo-side of bisexual.

Watt says people used to assume she was gay and now they assume she’s straight. “It’s not an easy fence to straddle. I hold it back here on the island. I’m a bisexual in a heterosexual relationship.”

“It’s somewhat rare and nice when someone is open to talking about it,” says Watt. “The possibility of me being with a man or a woman before them, or even after, is usually not a pleasant one.”

But the balance never seems perfect for when she goes back to visit friends and is once again immersed in the gay community, they ask “how are you doing with that boy?” Watt recalls. “There’s skepticism, like they’ve lost a team member.”

3. “You’re going to leave me for a man aren’t you,” she said from the other side of the bed, face half-buried in a pillow.

My first girlfriend, Liz, the one who looked more like a boy than most boys. After I told her that I preferred bi to dyke she would ask me, “Do you still call yourself bisexual?”

I was never certain how to answer this: she wanted me to say no but it was a lie, and a yes encountered anger because she felt she would never be enough to satisfy me.

When I asked why, she said it was because perhaps one day I would choose to be with a man and have the white-picket-fence nuclear-family dream. Bisexuality was seen as a freewheeling choice. And maybe it is, to some. But my heart rarely follows on command.

To Liz it was simply like I had an unquenchable thirst. She kept waiting for me to say, “Ah yes, right now I am filled.”

This is how I came to understand that some see bisexuality as synonymous with wanting more. No one person will ever be enough.

Another coming out story.

4. The most supportive statement I have ever heard about bisexuality was from my last boyfriend, Michael, who during a disagreement said, “Of course I support you. Don’t I introduce you as my lesbian girlfriend?”

Too bad I never identified as a lesbian. Too bad he didn’t understand bi either.

5. “I guess I inferred that from our conversation you were saying there was room for men in your relationship,” he said curtly via email. If something can be said curtly over the casual, often misunderstood exchanges that email allows, this man had it down pat.

Newly non-monogamous and eager to explore, he saw me as his perfect target. Happily committed to someone else, not a complete stranger and sexually open. To him, bisexual meant non-monogamous.

Me, I’ve never been able to make non-monogamy work. It was a disaster from the get-go. I know some extraordinary people who are marvelous at it, but I am not one of them.

Being bi certainly hasn’t given me this ability.

Non-monogamy is the one aspect that makes me want to shy away from the word bisexual. It actually makes me cringe at the word. Because the first time I came out to a straight male – a friend and the boyfriend of my roommate–his instantaneous response was, “Cool. Hey, you should come out with us sometime. We could hook up.”

Ursula Watt is also familiar with this story, not only because she was the third roommate in that house at the time, but also because it’s happened to her repeatedly.

“People totally sexualize it, especially men. You become hyper-sexualized, like you’ll take anything you can get,” she says.

Now she plays her cards close. She lives in a small community with her boyfriend and admits she thinks twice about who she’ll tell.

“It’s small here,” says Watt. “It’s not a place to be foot-loose and fancy-free without being noticed.”

6. “I don’t believe in bisexuality. Now I can’t speak for women, they seem to be more sexually fluid, but for men, it’s simply a stepping-stone in the coming out process. I can’t say that I know any bisexual men. They’re all gay now,” says my father.

I was raised by two lesbian mothers and two gay fathers. A household of gay, and yet coming out as bi was no less of a challenge. It was different and they didn’t understand it. It didn’t conform to the gay minority. Worse, it came with the privilege to pass as straight.

Saying this might make you read my coming out story with my mother differently. She’s gay. Should be easy. But I came from parents who would jokingly say, “If one of our children doesn’t end up gay then we’ll feel like failures.” With two straight-laced siblings, that left me. They wanted gay. I am what they call “undecided.”

I have been told repeatedly that if you choose to be bisexual you have three options: You remain single and date fluidly, you maintain constant non-monogamy, or you choose one partner and settle, at least publicly, with the label that it comes with. But I have come to believe that bisexual is more about what goes on in my head. So I’m in a committed relationship now and I am okay with being “bisexual, in a lesbian relationship” which often gets condensed to lesbian. It’s easier to take the label knowing that someone else out there is bisexual in a hetero relationship. Well, that’s how we are for now.