The Revolution Will Definitely Be Bisexual_ Amy Andre 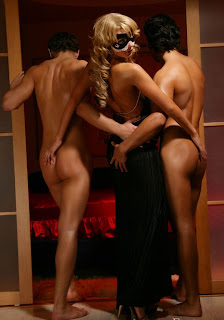 There's a new book out, and it aims to spark a revolution in bi politics. It's Bi: Notes for a Bisexual Revolution, by Shiri Eisner. Let's talk about it.

As I mentioned in my last post, I just had a baby. Yay! But that means my time is limited and not my own. So instead of reading the whole book all at once (I think all new parents will understand the impossibility of that task) and writing a review all at once, I'm going to take it one chapter or section at a time. My hope is that this will enable me to go deeper into the review and get some good commentary going on the blog. If you have a copy of the book at home, you can read along with me!
So far, I've read the introduction and first chapter. And so far so great! Bi community and allies, I think this is the book we've been waiting for! Eisner gives me a lot of pause for thought in her takedown of common bi responses to myths about bisexual people (e.g., that we're nonexistent, going through a phase, promiscuous, incapable of monogamy, etc.). I'd bet that nearly everyone who is bi knows these myths by heart, because they get thrown in our faces time and time again. (It would almost be boring if it weren't so annoying/infuriating/depressing, although lately it's the biphobes who seem depressed to me.)

Eisner takes a fresh look at the myths. It's clear that she thinks they're a load of crap too. No community is as monolithic as the biphobes would make us out to be. But she also takes issue with the way the bi community tends to respond to each of the myths. For example, the myth that bisexuals can't be monogamous is often reacted to with an "of course we can." But as Eisner rightly points out, not all of us are, and so what? As Seinfeld so aptly put it, "Not that there's anything wrong with that."

Eisner is cautioning us against leaving our polyamorous bi comrades behind for the sake of assimilationist dreams. She also has a very deft critique of the myth of promiscuity and the potential for sex-negative reactions to that myth among bi people.

One place she goes that I don't quite get yet -- and that may change as I read further -- is her response to the common bi comeback to the myth that bisexuality doesn't really exist. Paraphrasing the common bi response to that myth, she writes, "Yes, it does! Many studies and statistics exist that attest to the existence of bisexuality. I'm bisexual myself, and I'm not imaginary, right? Also, there's a whole bisexual movement for people who feel or identify as such. Bisexual people definitely exist; so no more denial."

Uh, I think I've written and/or said versions of those phrases many times. Now I'm starting to think that my approach to countering this myth isn't revolutionary enough, or even at all. But wait, if someone says that I or we don't exist, don't I have to say, "Yes, we do"? And doesn't it help when I back it up with the abundance of stats that show that there are millions of us, and that we make up 50 percent of the LGB-identified population? Isn't it revolutionary enough when I come out of the closet myself?

And what about the health of our community? As I've written time and again, bisexual health is, on the whole, poorer than gay, lesbian, or straight health. Bisexual women are more likely than other women to be victims of domestic violence. We have a problem here, and it's a significant one. And a lot of the health and violence issues either stem from or are exacerbated by isolation and feelings of being "the only one." Isn't citing the stats over and over again a way to promote health? If someone feels alone, shouldn't we tell them (and the biphobes who would harm them), "You're not alone, not by a long shot"?